Mimaki and OKI previously announced that Mimaki is now responsible for the sales and support of OKI large format products, including support from the installed base and products previously marketed by OKI’s large format division. The latter had only been in existence for a relatively short time and resulted from OKI’s earlier takeover of Seiko’s large format activities.

OKI remains responsible for building two models that are currently being supplied – the OKI M-64-S, a 64 inch wide printer equipped with OKI’s eco solvent SX ink, and the OKI H3-104S. With a print width of 104 inches (approx. 250 cm), the H3-104-S is a bit of an odd one out. Most manufacturers, including Mimaki, now supply printers at 3.2 m wide. However, the H3-104S has many users. The OKI SX solvent inks, print speeds and mesh kit option are valued across the market. Both printers hardly overlap with the existing Mimaki range.

So, since April 1 Mimaki has been supplying both large format OKI dealers and its own Mimaki dealers with OKI printers, replacement parts and inks, also for older models. OKI dealers in turn get access to other products in the Mimaki range. OKI printers are also sold under their own label since April 1.

Whereas the OKIs are sold under their own label, it is a different situation with the new 3D printer announced by Mimaki, the Mimaki 3DGD-1800 3D. Real connoisseurs will soon recognize the 3D printer developed by Massivit, which will be marketed with the same specifications. Mimaki aims to establish a leading position in the 3D printing market in the long term. This means that, where necessary, the company will collaborate with partners to supply the necessary systems, such as Massivit in this case. Mimaki can rely on its extensive distribution network and ensure that it fits in with the rest of the Mimaki range. Unlike the other 3D printers in the current Mimaki range, the 3DGD-1800 3D is also interesting for the sign and graphics market. The printer has two nozzles that can fill a building volume with a base area of 145 x 111 cm to a height of 180 cm. The 3DGD-1800 uses and sprays a liquid gel that contains a UV-curable resin, which is scratched with LED UV light. The construction height is 35 cm/hr. Colour is immediately added to the pale white end resulting with the aid of a pre-printed shrink or wrap film in a complete product. Spraying or other forms of breeding are also possible.

One of the applications for 3D printing in our market is the creation of 3D advertising objects. You can also create facade texts and logos in 3D. One complicating factor is that in some cases you need space for both the 3D printer and to sand and polish the rough printed object and, were necessary, spray it in colour. The printer will also produce a base for illuminated letters and logos. The milky white resin is translucent. In this particular application both the outside and inside have to be perfectly polished. 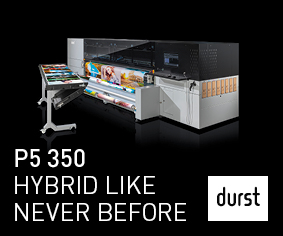